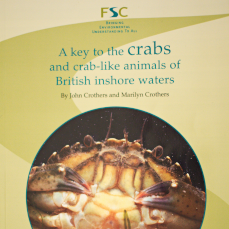 Series: AIDGAP (Aids to Identification in Difficult Groups of Animals and Plants)

This is the book we use at home to try and identify new crab species discovered during a recent visit. The key relies on characteristics which we may not have noted at the time but at least we learn what to look out for in the future.

The Introduction explains the function of the book; to help anyone to identify a crab or crab-like creature without harming it. This is followed by a short but useful summary of crab biology including clear diagrams naming the parts which are used in the key. Great stuff, because I would not have known rostral horns from a peduncle without.

The final two parts explain the problems with species identification and then the use of the key. It also leaves us with the sagely advice:

I have reviewed that book elsewhere.

A key to crabs

The key is actually quite straightforward. In most cases, it is simply a matter of seeing whether a feature is present or not.

Unfortunately we did note a couple of places where the numbers for the next stage appear to be either missing or incorrect. I will list those below for anyone to consider if using the key. It might save some time puzzling, as we did.

The latter part of the book has a list of all of the species, grouped according to the taxonomy (very useful), some academic references (probably useful latter) and then sketches of the different species. These are only black and white but still very useful. Key features really stand out and I can always find colour photos with an online search if necessary.

As noted above, having read through the key, we think the following sections should read differently:

Please leave a comment if you have other ideas.