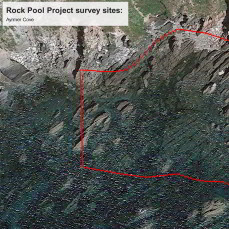 After my first crustacean survey with the Rockpool Project, we were encouraged to think about setting up our own survey site. After Dad checked with Ben Holt, the director, we decided to add our favourite reef at Ayrmer Cove. This was a spot where we found several first-ever species, and has lots of promise for future discoveries.

This beach is not as well known as nearby Challaborough, and Bigbury beyond that, and therefore its small National Trust car park normally has spaces available. There is currently no fixed charge, but there is a donation box. There is then a very good track down to the cove, although it always seems much longer coming back up.

We started by exploring the reef to the right (looking out to sea) although we did check out the other side later and found other interesting pools. For this project though we decided to stick with the area where we had our best discoveries.

What makes a good survey site

We liked Ayrmer Cove and thought it would make a good first survey site but we needed to check on a few issues with Ben Holt before committing to getting it listed.

Here are our questions:

What makes a good survey site?

How big should the site be?

I see a reference to the coastal length being approximately 100m.

Who names the site?

I presume these are to be related to a nearby OS feature.

What makes a good survey site?

– We are focusing at this stage on getting repeated surveys at the same sites across a 12 month period. This will allow us to consider both seasonal variation and variation in tidal heights, which are two important factors that we may well need to factor out when making other comparisons. So the main consideration at this stage for new sites would be how easy would it be for you or someone else to survey the site in future months.

How big should the site be?

– Roughly 100m is fine. As you mention, gradients and local tidal ranges make it impossible to make all sites the same area size. The only consideration with size is that surveyors should not run out of places to look within their survey time (45 min). So, if in doubt, go bigger. If the corners can be based around local landmarks of some kind, that is perfect as it makes it much easier for people to identify the site when they get to the beach.

– One or two of our existing sites are a bit tricky to access actually but, given what I said above, it is better if this is not the case. Certainly avoid sites with serious safety concerns. We have two new volunteers for our Science Communication role and, in our first meeting last week, we did discuss having a blog theme focusing on each site. It might be better if we instead focus first on providing this kind of practical advice on the sites.

Who names the site?

– If you set the site up then this honour is yours! Any name you feel is appropriate is fine.

Ayrmer Cove seems to fill a gap on the coast, there being nothing else between Wembury and East Prawle. The ease of access means it should be good for others too.

Deciding which 100m section to include was tricky (see below) but we reckon that the broad reef with numerous gullies offers enough to keep even a small team busy, especially for a 45 minute survey.

Safety at this site is not a big issue. There are tunnels from this site through to Wyscombe Cove and others beyond that, but there is no real reason why anyone would get cut-off by an incoming tide.

I am happy just to call the site Ayrmer Cove West. This fits in with the general naming of other sites and, by chance, puts it at the top of the list (for now).

How to mark a survey site

The current list of survey sites for the Rockpool Project can be found on this link. At the bottom of that page is a link to the instructions for Requesting a new survey site.

We followed these simple steps, and sent the link with our map as instructed at the end. Ayrmer Cove was then added as a marker within a week. The survey site only went fully live yesterday evening. I guess that there were quite a few steps to make that happen and how long that takes will depend on how many other sites are being requested and how busy they are with other things.

The hardest part for us was in determining where we should place the boundaries. We would have liked to include the whole reef, but that would have been way too big. Using the easily identifiable rocks in the middle would have been about right but would have missed out some of our best spots. We finally decided that the best solution was to line up the edges with features on the cliff behind, as these would be visible whatever the state of the tide.

We settled on the name Ayrmer Cove West, allowing us (or someone else) to request another survey site across the cove later. Actually, we are more likely to request one further west, beyond Wyscombe Beach as that was the venue of another successful visit.

The link to the final definition can be found at: https://www.therockpoolproject.co.uk/citizen-science-projects/survey-sites/

I am really keen to go back now and start logging some species. I am also looking forward to spring when the spider crabs return as we found a good few this year, and now we know what to look for in terms of identification.