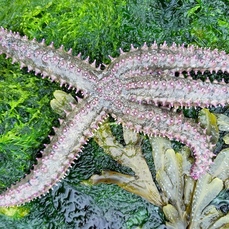 This trip to Whitsand Bay was notable for the number of spider crabs we found; 7 in total. I wish now we had taken photos.

Purpose: This was a crabbing trip with my family and my uncle and cousin.

Almost as soon as we arrived Dad jumped into a gully waist-deep with water (the tide still had a couple of hours to go out fully) and saw a spider crab. We found a total of 7 of these during the day – all female. They were not obviously ‘in berry’ so we figured they were probably coming in shore to moult before breeding.

We also saw lots of edible crabs, including large ones and pairs, male and female in the same hole. Apparently the males often protect the female during her moult. As I had not started this blog yet we did not take any pictures of the crabs.

We did take a picture of this spiny starfish (Marthasterias glacialis) which contrasted nicely with the green weed behind.