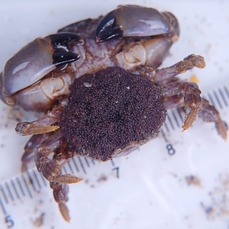 Purpose: This was an exploratory trip to a new beach for us, Ayrmer Cove, near Challaborough. Dad knew the area but had never been here before. I was excited to find new things and put my new camera skills into practice.

Route and location: Ayrmer Cove near Ringmore (in the South Hams). There is a National Trust car park with a good path straight down to the beach.

As it turned out, we discovered 10 species for my iRecord account – a great tally, especially as this included a my first ever Hairy Crab, and a strange spider crab. We have submitted it as a Great Spider Crab (Hyas araneus) but this is yet to be confirmed as there are several closely related species that are hard to distinguish. At least now we know what to look out for.

We see many prawns when rock-pooling. We do not normally bother taking a photo but did so today for my iRecords.

This was the first species we found. Later on, we found another one under a rock.

Dad found this spider crab in a large rock-pool, just about spotting it while it was moving across a sandy patch. These are very hard to spot as they cover themselves up in seaweed though I did find another 3 of these later on in the day.

Dad turned over a rock and a few brittle stars were under it. Brittle stars are alien like and weird to hold.

I found a small ballan wrasse in a rock-pool swimming near the surface so I dipped my net in and caught it. When we go fishing we often catch larger ones – up to about 4 pounds. My uncle apparently caught one over 7 pounds.

Dad found a montagu crab with eggs. Biologists usually say that the crab is ‘in-berry’ when like this.

This was the first hairy crab we have ever found. It is quite easy to see where it gets its name.

This photo shows just why these get the nickname ‘Devil crabs’.

Not the clearest photo, but sufficient for identification.

Note: there are only 3 walking legs for this species so they are not ‘True crabs’. The missing pair exist but are too small to be noticed.