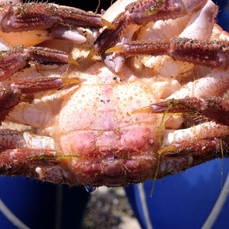 Dad did a bit of research and found out how we can submit our findings. Here I describe how I submitted my first iRecord. You can check out the full procedure on the Biological Records Centre website.

How I submit an iRecord

For convenience I have added a page which includes the BRC form using a WordPress plugin. I need to be logged in to the main site above in order for the records to be attached to my account.

Filling in the form is easy so long as you have already identified the species, preferably with the latin scientific name.

If you have the latin name, then type in the first two letters of the first part and the first three of the second part. For example, Cancer pagurus becomes capag. The species should then appear, with any common name and a higher level taxanomic grouping. This is the phylum or subphylum, I think. Sometimes there are alternative species which fit the 5 letter short-code. Click on the species you want.

There is a field on the form to indicate if you are sure about this identification or not. For my first iRecord we chose to do a brown crab knowing 100% that we had this right.

There are spaces for sex and stage, if you know these. There is also space for quantity. At first I thought we could only enter numbers but words seem to work to so often we put Abundant or Several.

We uploaded 2 photos so that anyone checking the record can confirm our identification. The second phtoto was of the underside to show that the crab was female.

There is a very clever map function that allowed us to zoom in to a 10m square. In this case we were able to identify the exact gully and to be this accurate.

We now use an app on Dad’s phone to record the GPS position of discoveries. This can record using the WGS84 format, and that allows us to type that directly into the BRC form using decimals.

We added a comment at the end to say this crab had just moulted and also to say something about the abundance of this species which might be of use to anyone checing the record.

The whole process took only a couple of minutes and was quite fun. The end result:

The first accepted iRecord was for my Common Starfish Asterias rubens. Notice that the iRecord has been Verified by. This is the bit I really like as I then know that my identification skills are getting better.