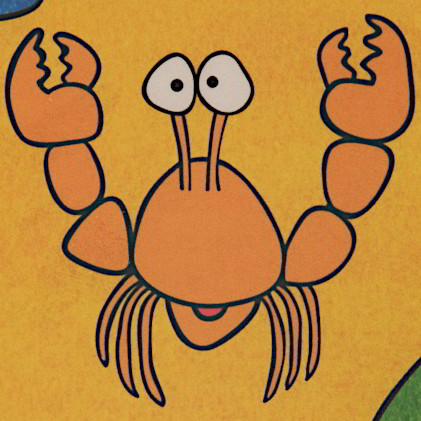 There are many things that look like crabs that are not, and several that do not that are. What makes for a True crab, and what are these others?

Fortunately, all of the crab-like species belong to one taxonomic grouping, the Order Decapoda (Decapods). They have five pairs of legs (pereiopods) attached to the thorax.

However, those legs are not always as they seem.

Here the cartoonist knows that (some) starfish have five legs. However, a true crab has two claws (chelae) and eight walking legs. Two are missing – which leaves this crab out of the 10-legged group Decapods.

I say missing but, actually, in some species those legs exist, they have just become redundant and are smaller and are tucked away out of sight.

In true crabs the four pairs of walking legs are clearly visible. Specimens with legs missing are common – life on the reef is tough – but the socket where these would join the thorax should always be present.

The Brachyura represent the highest development attained by articulated animals in the sea. Their hormonally controlled molting cycle, autotomy reflex, and ability to regenerate lost limbs excite the physiologist; their highly organized nervous systems, complex organs of sight and sound production, and incipient social organization beguile the animal behaviorist as well. Their commensal and mutualistic relationships with other invertebrates intrigue the marine ecologist, and their role as hosts to invading arthropods engages the parasitologist’s attention.

That about sums it up for me. Crabs are incredible, and the more I learn the more amazed I am. They taste good too.

In the UK we have the following members of the Brachyura.

A group with expanded and flattened ‘feet’ (dactyli) on the last pair of legs – effectively paddles – often with a hairy fringe.

A group noted for their pear-shaped carapace (narrow point forward) with prominent rostral horns between the eyes, and longer, more-delicate legs than would be expected for their size.

I can see no other way to classify these. My grouping includes regulars such as the edible crab and furrowed crabs as well as unusual species like the hairy crab, the masked crab, pea crabs and some with no common name.

Whereas true crabs are very similar anatomically, those belonging to the Anomura are really quite different. These seem lumped together as a group more for convenience (the other ones) than because they truly belong together.

If the Anomura have one thing in common it is that they have evolved to resemble a crab. That is, at first glance they appear to have a hard outer shell (exoskeleton), claws and legs for walking. For the cartoonist above, and many others, this is probably good enough.

In the UK we have the following members of the Anomura.

Hermit crabs have a soft(er) non-calcified exoskeleton and would be easy prey if not for their adaptations allowing them to occupy empty mollusc shells. This must have some evolutionary advantages as there are over 800species of hermit crab around the world, including some land crabs.

There can be much competition between hermit crabs when suitable shells are in short supply. This can lead to fights but also to instances of remarkable patience and cooperation. Perhaps a subject for another day.

We find many Broad-clawed porcelain crabs along the south coast of Devon. These have two outsize hairy claws and then only three pairs of walking legs. The other pair is apparently reduced in size and hidden under the carapace – evolutionarily redundant. There is also along-clawed variant that I haven’t found to date.

We found a few Squat lobsters in the Scilly Isles last year, before I started this blog. There are many other species around the world. All seem to be somewhere between prawns/lobsters and crabs in terms of shape – with a shorter ‘body’ and their long tail held curled up under their cephalothorax.

This species is normally only found in the northern half of the UK’s waters and, even then, usually at depth. As these reproduce slowly they are not viable as a commercial target.