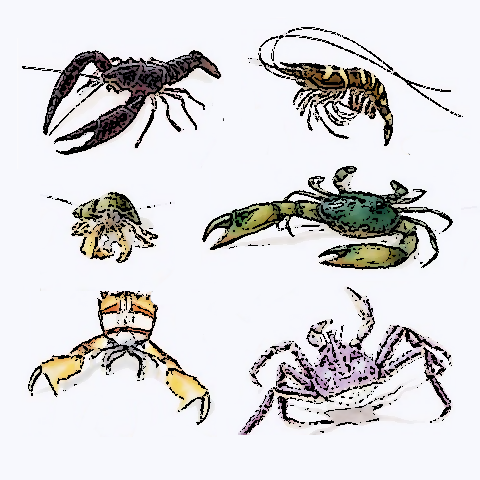 My main interest at the moment has passed from fish species to crabs, prawns and, I wish, lobsters. Together, these are better know to Marine Biologists as Decapods. Here are some of the things I have found out.

Before starting this I knew that prawns, crabs and lobsters were Crustaceans. Having looked up the Wikipedia entry I now know the full hierarchy:

I enjoyed looking at the entry for this group. Apparently, it includes Krill (Euphausiacea), which I have heard of, Decapods and then two other orders. One of these is described as extinct and the other as enigmatic (mysterious). To my mind, then, that really is just two orders.

… characterised by having the carapace fused to all thoracic segments, and by the possession of stalked eyes.

More on anatomy below.

Literally “Ten feet” (apparently from Greek). These are actually more obvious as five pairs of legs (pereiopods) attached to the thorax.

Care needed here: Although there have to be five pairs of legs, with certain species some of the legs have been adapted and may not appear as such at first glance. For instance, we regularly find Porcelain crabs, which are not True crabs, and these seem to have a pair of claws and only three pairs of walking legs. The fourth pair do not develop fully and stay tucked up under the abdomen out of sight.

[Apologies to any marine biologists who specialise in sand fleas.]

What is so special about Decapods?

The best thing about Decapods is that they include a number of species that are edible. My Dad’s family have a tradition of foraging around the coast and it was whilst he was looking for edible crabs that I got my liking for rock-pools and the life within.

At first, crabs seems quite scary. Their claws look dangerous and they will defend themselves. Now that I know how to handle crabs correctly I am less scared. Velvet swimming crabs (Necora puber aka Devil crabs) are the worst, very aggressive and fast, so I usually let Dad handle those.

More on their anatomy

Like insects, Decapods have three body regions: head, thorax and abdomen. The head and thorax are fused (joined together) and therefore called a cephalothorax. Each body region has appendages. In general terms:

Decapods breath (respire) through gills. These are found under the cephalothorax. In crabs these are often called Dead man’s fingers which, being inedible, must be removed before eating the meat.

Relationships with other organisms

Some crabs, notably hermit crabs and spider crab species, are known to decorate themselves with anemones and Bryozoa. The crab therefore becomes camouflaged and harder for predators to find. The passengers probably get little benefit from the arrangement but certainly come to no harm.

Pea crabs (Pinnotheres pisum) in the UK usually live inside a mussel shell. They exist as a parasite, sometimes feeding on the mucous strings that would otherwise bring the mussel its food.

Some shrimp species remove parasites from the mouths and/or gills of fish. This is an example of a mutalistic symbiosis; both parties benefit.

Where are Decapods found?

Decapods are found all over the world in marine, brackish, fresh and terrestrial environments.

The Antarctic is notable for its lack of Decapods, though the combined biomass of Antarctic krill Euphausia superba (see Eucarida above) is larger than almost any other species.

How big can Decapods grow?

The smallest Decapod is surely a sand flea, though I haven’t been able to confirm this. The smallest crab is the Pea crab, which we met above. These parasites live in a range of mollusc hosts and are usually about 4mm across when fully grown.

The heaviest species is the American lobster (Homarus americanus) which can weigh over 20kg. For me, the Japanese spider crab (Macrocheira kaempferi) is more impressive. These can weigh up to 19kg and reach up to 3.7m from claw to claw.

I am mostly interested in the UK species found in the marine environment, specifically the inter-tidal zone. Hopefully, I will learn to dive in the coming years and be able to extend my interests.

Like many other animals with an exoskeleton, Decapods must shed their hard outer layer in order to grow; this is known as moulting.

Most species moult during a specific season. Females usually moult before mating, males after, with hormones playing a key part in the triggering of both acts.

Individuals will try to find a shelter in which to moult. This could just be a crevice in a rock. The old skin will crack open along a key seam and the creature will escape from this, usually backwards. It is common to find moults on the seashore, with many people wrongly identifying them as dead specimens.

After moulting a Decapod is extremely vulnerable. Not only is their new ‘skin’ soft, they will have stored up additional nutrients in the lead up to moulting (as they will not be able to feed until the skin has hardened fully) and are seen by predators as extra delicious. Ask a sea angler what is the best bait and for many species the answer will be simple – peeler crab.

Growth is achieved in the short period before hardening. The creature will absorb water in order to increase its volume. I have seen figures as low as 2% for the increase in volume up to 30%. Another study showed the range as 9-25%.

During moulting it is possible for the individual to regrow a part of a lost limb. Over several cycles it might even regrow the limb entirely, though it will always remain smaller than it could originally have been.